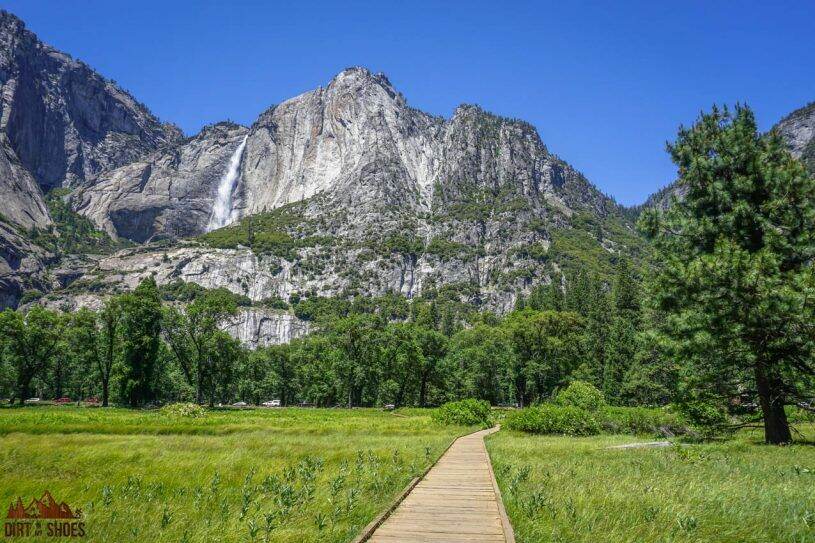 You made it to Step Three!  Up until now, the steps have been pretty simple….but it’s time to dig into the nitty-gritty of trip planning.

Your task now is to decide what you want to see while you are in Yosemite.  This will likely involve several hours of planning and research.

Or…if you’d like to bypass this step, take a look at this Yosemite Itinerary.  I’ve already done all the hard work for you!

Now it’s time to get out your notes and laptop and get ready to research.

First, make a list of the things you absolutely don’t want to miss while you are in Yosemite.

These are the big points of interest that initially piqued your interest in taking a trip to the park.

You may find the official NPS website and the Dirt In My Shoes Ultimate Guide to Yosemite helpful for finding the can’t-miss spots.

If it’s your first time to Yosemite, your list will probably include places like Tunnel View, Yosemite Fall, and Glacier Point.

This list might also include wildlife viewing spots, activities you’d like to take part in, or restaurants you’re dying to try depending on your personal interests and priorities.

Second, make a list of things that would be nice to do or see if you’re able to fit them in.

Maybe you’re excited about all of the waterfalls, but you’re not sure if you’ll be able to get to a few of the smaller ones.  Put those smaller ones on this list.

Maybe you want to hike the some of the park’s longer trails, but you’re not sure if you’ll have time to do them.  Put those hikes on this list.

Third, use the lists you made to group the activities together by region.

Take a look at the Yosemite map and organize the things you want to do based on where they are located within the park.

It actually is possible to have a disastrous time in Yosemite, which is why this step is so important to complete.  Yosemite is definitely not a place you just want to show up to without a good plan.

Don’t forget that I’ve already created a spectacular plan for you if you need some help completing this step.

It’s much easier to move forward with planning if you have a list of must-see’s organized together by region….and it sure will come in handy over the next two steps as we wrap up your Yosemite plan.

That’s it for Step Three!  Now on to Step Four, where you’ll learn all about the entrances and towns that surround the park.

My name is Ash and I'm a former park ranger! My goal is to take you to and through America's beautiful national parks by providing in-depth information based on my firsthand experience!